“Russello’s music is a uniquely inspired experience in the Northeastern Pennsylvania rock scene.”

The Russello Project is an instrumental trio led by guitarist Charlie Russello. Blending rock and newage soundscapes they take their listeners on a dynamic, heart-felt journey.

The group is composed of veteran musicians Bob Kirby (drums), & Steve Welsh (Keyboards). Charlie explains "we are all on the same wave length, our music has an emotional bond that drives us."

Listeners of any genre will find themselves lost in the music at a live performance. Make it a point to enjoy an evening with The Russello Project for an unforgettable experience! 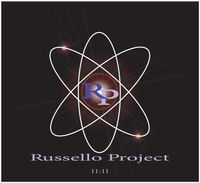 Free music festival throughout Honesdale with a main stage in Central Park. The Russello Project will perform in the morning to kick off the festival. Activities for the whole family as well. www.honesdalerootsandrhythm.com for more info.

Bob has played with a number of northeast US bands spanning multiple genres including bluegrass, blues, country, rock, fusion and progressive rock.

Steve has an extensive background in music creation and is an experienced musician who has a knack for weaving beautiful textures and melodies into our music.

"Rock/jazz hybrid The Russello Project played gut-wrenching sets that cut through any superficial musical pretense and laid bare the heart of players seeking an almost spiritual connection through their craft. The Russello Project is, simply put, a musician’s delight. The outfit offers shredding without the extraneous look-at-me wanking: vital, melodic hooks and atmospheric ambience – sort of an aural movie unfolding where the plot is anyone’s guess."

"A calm silence fell over the crowd as the band played their set – very unusual for any kind of bar atmosphere. Other than the music itself, you could hear a pin drop as they played their signature piece, “Sky.” "

"The Russello Project is hands down, one of the most talented instrumental rock band I’ve come across."

"...Guitar-based instrumental rock group The Russello Project just released a live video of their original song “54” ... that shows off exactly why frontman Charlie Russello was named Guitarist of the Year at the 2014 Steamtown Music Awards."

The decision paid off, because Mr. Russello said he’s being recognized for his work more than at any other time in his career. The upcoming Electric City Music Conference nominated him for guitarist of year, while the Russello Project is up for best band. The band will perform at the conference, and Mr. Russello will teach a guitar master glass."